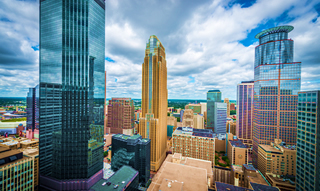 Minneapolis, officially the City of Minneapolis, and larger of the Twin Cities, is the largest city in the state of Minnesota and 46th-largest in the United States. Minneapolis and Saint Paul anchor the second-largest economic center in the Midwest, behind Chicago. Minneapolis lies on both banks of the Mississippi River, just north of the river's confluence with the Minnesota River, and adjoins Saint Paul, the state's capital. The city is abundantly rich in water, with twenty lakes and wetlands, the Mississippi River, creeks and waterfalls, many connected by parkways in the Chain of Lakes and the Grand Rounds National Scenic Byway. It was once the world's flour milling capital and a hub for timber, and today is the primary business center between Chicago and Seattle, with Minneapolis proper containing America's fifth-highest concentration of Fortune 500 companies. Minneapolis' name is attributed to the city's first schoolteacher who combined mni, a Dakota Sioux word for water, and polis, the Greek word for city. The City of Minneapolis prides itself in being a leader in developing efficient, sustainable practices and facilities.

The closest airport to Courtyard Minneapolis Downtown is the Minneapolis–Saint Paul International Airport (MSP). The airport is about 12 miles (20 minutes) away from the conference location.